How to Slip & Roll in Boxing 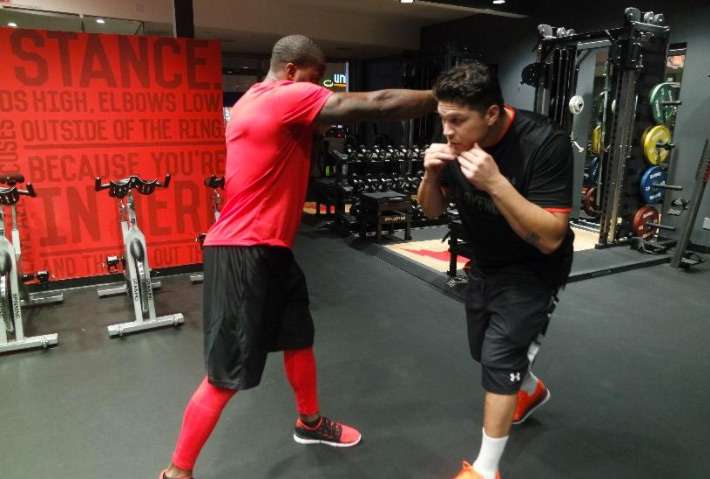 There are plenty of moves in the boxing ring that the general public has heard of from watching a boxing match or movies. They understand what it means when boxers jab, bob and weave, throw a left hook or practice shadow boxing on the double-ended bag. The slip and roll boxing movements, on the other hand, are something many contenders aren't aware of until they strap on their boxing gloves in the studio as beginners.

The slip and roll boxing movements are essential defensive moves. Slipping and rolling are moves used in boxing to avoid being punched. They are very calculated moves that are usually used in the ring but can still be learned and applied while working on the mitts. If you want to learn how to break down slipping and rolling in boxing, check out this introduction, along with some basic footwork instructions from our Gloveworx coaches.

Why We Slip and Roll

Two of the most fundamental concepts of boxing are defense and offense. As important as it is to learn how to hit, it's equally important to learn defense techniques to avoid your opponents' gloves as they come flying toward you. Boxers learn how to slip and roll in boxing for both offensive and defensive functions. When you move to avoid being punched, you’re moving defensively, and when you move to come forward and throw your opponent off balance, you’re moving offensively.

How We Slip and Roll in Boxing

To properly slip or roll, your movement is primarily based on footwork and hip hinging. These are the vital mechanics of executing these techniques effectively and maintaining your balance and control.

A slip is a head movement that doubles as an avoidance tactic to "slip punches." When you move your head to one side of your shoulder to dodge a blow, you have essentially completed a boxing slip. It’s a very subtle movement and, as such, it’s a very effective tactic when executed correctly. Whether your opponent has thrown a jab or punches, you can slip to the right or the left. A boxing slip is performed in the same way, no matter which direction you choose to dip toward.

The boxing slip is meant to be an alternative to blocking. Rather than taking the left hook your opponent throws in a less damaging way, you're avoiding the impact entirely. This head movement is considered an advanced defense move; you should take time to learn and train the basic boxing techniques first. When slipping is done correctly, you should be able to recover quickly and counter punch before your opponent recovers. You might even call it slipping in punches!

When learning how to slip in either direction, slightly bend your knee and drop your upper body through a hinge in your hip. Hinging from your hip, instead of from the spine, allows you to lower your body out of punching range to avoid the attack, but still keep your eyes on your opponent and your powerline strong. Remember, you slip with your legs.

A slip, slip is when you move your head from one side to the other side. An orthodox fighter would perform this move by slipping right first and then left, while a Southpaw fighter would slip first to the left and then to the right. When a two-punch combo is thrown at you, you can use the slip, slip to avoid getting hit. Since the slip, slip is just two slips one right after another, you utilize the same bend in the knee and hip hinge pattern as in a regular slip.

Boxing Slip vs. Bobbing and Weaving

A lot of boxers struggle to understand the difference between the slip and the bob and weave movements when they first strap on their gloves. Essentially, with a slip, your body moves to the side so that the punch passes by you without resistance. In bobbing and weaving, your head movement is side to side but also under the punch. When you see someone ducking laterally under a rope, back and forth during training, they are practicing their bob and weave.

You would typically use the boxing slip, slip roll move to avoid a punch combo that starts with a jab, then goes to a straight right hand, and finishes with a hook. When working on this combo in your boxing session, you want to learn how to slip the first two punches and roll the third.

The hook is a typical finishing punch to a combo after a jab and a right hand. Fighters in close range also use looping punches that tend to be hooks from both the left and right hands, so the slip, slip, roll is one of the most common ways to avoid these types of boxing combinations.

You can perform your slipping movements with the knee bend and the hip hinge, but when it’s time to roll after a jab or right hand, bend your knees, step to the right, and roll onto your foot to avoid the hook. You’ll need to bend your knees a bit more during this move, as you want the hook to pass completely over your head.

How this Plays into Amateur Boxing

When you step into the studio, you may do so with the intention of using all of the glorious boxing equipment before you, without ever dedicating yourself to more than amateur boxing for your health. There may never be a boxing match in your plans, and your boxing gloves may only be drawn to the double-ended bag or heavy bag, rather than an opponent.

Even so, it's important to learn the skills. If you're going to do something, learn to do it right, even if your only opponent is yourself. One could argue that you'll never even need to learn a proper boxing stance if you're never going to face an opponent. However, being able to do the movements properly will give you the best workout possible while preventing injury. Take the time to learn how to perfect your boxing head movement and slip a punch. Take the time to throw a mean left hook and aggressive straight punches. Put your best foot forward, be a fighter and Become Unstoppable.

There are a few drills you can practice to improve your slip and roll boxing technique. Start by focusing on footwork. Get into your boxer’s stance, with your right shoulder under the rope. Start to move forward, staying on your toes, and moving your left foot then your right. This will help you learn to move your lead foot first. Switch sides when you've perfected it. Then try incorporating your roll under the rope.

Once you have those steps down you can try some shadow boxing style punching moves, throwing a counter punch at your invisible opponent, slipping a punch to their "body" and practicing different boxing combinations as you move.

Next time you're training in the studio, ask your coach to teach you how to slip and roll during boxing. Not sure where to start? Take our quiz to find the right training session for you.

Our team and workouts will challenge both your mind and body to keep up and to stay present. We pride ourselves on keeping our community both mentally and physically fit inside and outside of the ring. Allow yourself to fight through the process and be patient on your progress — remember, it doesn't happen overnight. We're 100% here for you to get to where you want to be. #letsgo #becomeunstoppable⚡